How the Moon Illuminates Our Sky and Controls Oceanic Tides

When you look at the moon do you ever wonder about the relationship between its visibility and oceanic tides? The earth, moon, and auxiliary planets participate in an elliptical orbit around the sun, a course that is non-circular and similar to the shape of an oval (1). The sun is the center of this orbit as it has a significant gravitational force compared to all of the other masses (2). All celestial bodies with substantial masses, such as planets, the moon, and the sun, rotate on an axis, an invisible line that penetrates through the center of these objects (3). The earth rotates around its axis every twenty-four hours and revolves around the sun once each year (4). However, the moon’s rotation on its axis and revolution around the earth both take twenty-nine days, allowing the same side of the moon to continually face the earth (4,5). The relationship between the earth, moon, and sun dictates the visibility of the moon, along with the pattern of oceanic tides around the world (6).

The moon has eight phases, each of which are differentiated by its position, orbit, and reflection of the sun’s light (7). Depending on the moon’s position in relation to the sun, its image from the earth drastically changes throughout the month. The first phase is the new moon phase, or the “invisible stage,” and is when the bright side of the moon faces the sun (5). The next phases of the waxing crescent and the first quarter demonstrate the progression of the satellite’s orbit around the earth. At first, a sliver of the moon is illuminated, followed by what appears to be half (8). While the first quarter moon takes shape as a glowing half, the name of this stage is derived from its revolution around the earth, as one-quarter of the orbit is completed by this stage (8).

In the fourth phase, the moon is a waxing gibbous. While most of the moon is opposite the sun, its silhouette is not entirely lit up (8). Once the moon’s orbit is at the point where it is completely opposite the sun, its shape becomes illuminated. As the earth’s satellite, the moon, makes its journey toward the sun, it completes the phases of waning gibbous, last quarter, and waning crescent (8). By the waning gibbous stage, the amount of the moon’s light that beams proportionately decreases, and by the last quarter phase, it returns to being half lit up (5). Lastly, the moon reaches the last stage of waning crescent when a thin oblong shape is lit up; after this phase, the moon returns to the first stage (8). 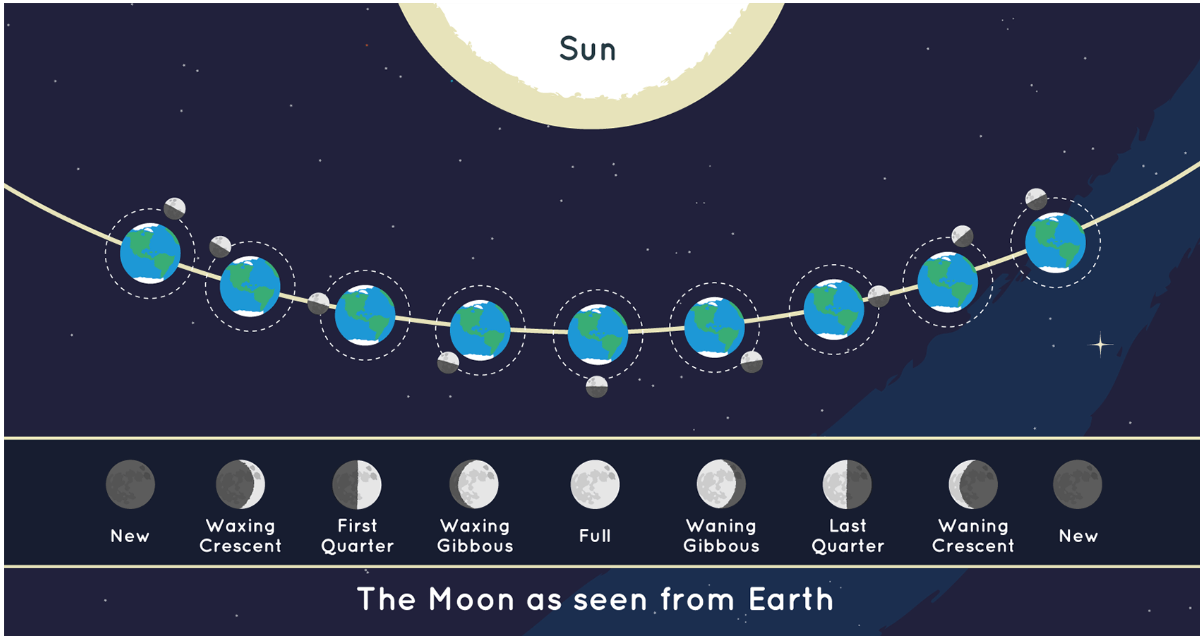 The eight phases of Earth’s moon (8).

Tidal force on Earth can be calculated from the average gravitational pull of the moon subtracted from its pull at one location. This calculation and transpiration of events in reality ultimately leads to a “stretching and squeezing” of the earth, creating two high tides at one time (9).

The moon’s gravitational pull on the earth is not the only factor determining notable high and low tides. When the moon is in the new or full phase, high tides reach their ultimate heights and low tides plummet. These types of tides are classified as spring tides. At this point, the earth, moon, and sun are all parallel to one another, and the additional gravity of the sun creates an increased swelling of Earth’s water (10). On the other hand, neap tides occur at the quarter phases when the sun pulls against the moon’s gravitational force, producing less of a margin between high and low tides (10). When the moon is a waxing gibbous or waning crescent, about to approach the full and new phases, high tides increase in size, and low tides decrease (10). Similarly, when the moon is a waning gibbous or waxing crescent and nearing the quarter phases, high tides reduce in size and low tides are at their extreme height (10).

While we may look up at the night sky and see varying projections of the moon every day, its visibility and illumination are vital in informing our world about the pattern and magnitude of high and low tides, especially as more coastal communities face the threat of climate change. 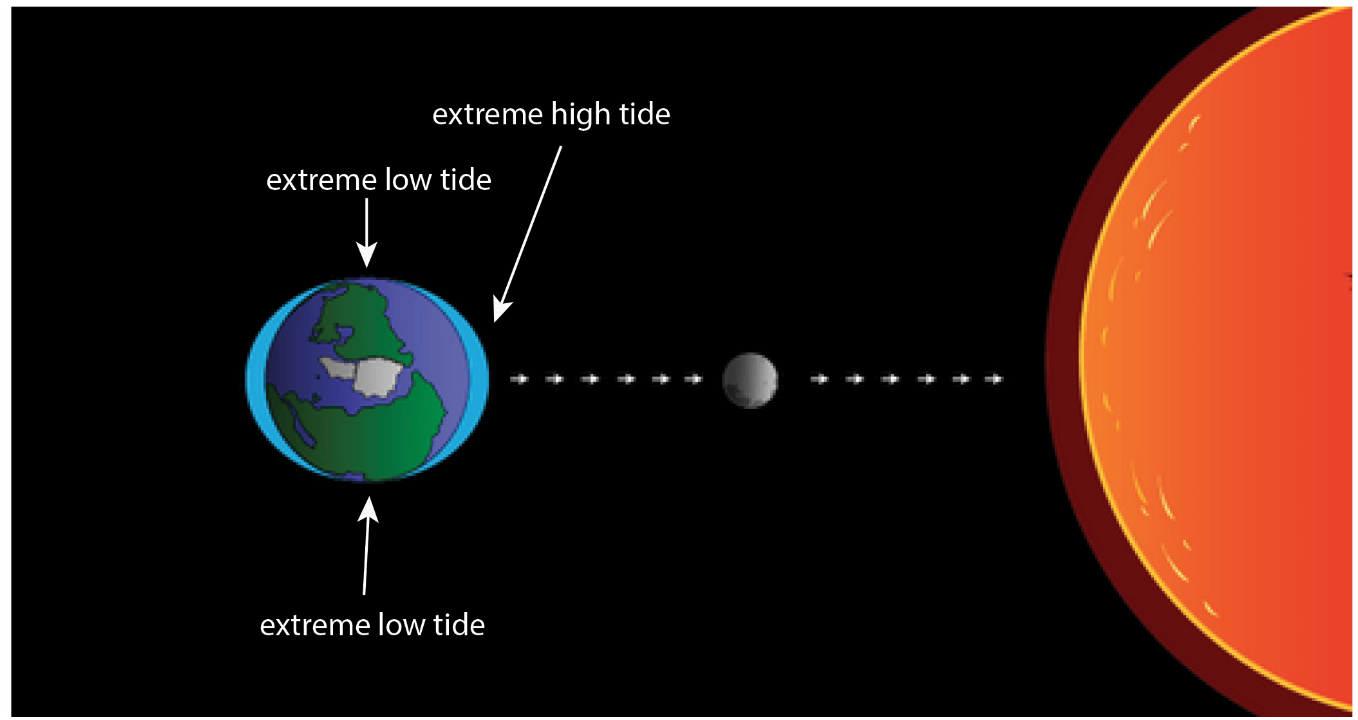 A depiction of the high and low tides on Earth’s water based on the position of the sun and moon (9).

This is the online home of Buckingham Browne & Nichols’s CHASM.